LEGISLATION OF THE REGULATORY LAW ON THE CONSUMPTION OF ALCOHOLIC BEVERAGES

1. Registry of Sellers (and producers) of Alcoholic Beverages.

The first chapter of the Decree is responsible for regulating the Registry of Sellers of Alcoholic Beverages, established by Art. 6 of the Law, which is of public access. As stated, this Registry will operate under the aegis of the General Directorate of Health of the Ministry of Public Health.

The Law also provides that in the Reference Registry all those natural or legal persons who intend to distribute, market, sell, offer or supply alcoholic beverages (defined in Art. 3 of the Law as “any beverage whose natural or acquired content or alcoholic strength is equal to or greater than 0.1% [zero with one percent] of its volume”, except “pharmaceutical preparations, syrups and similar preparations for medicinal use authorized by the health authority”).

The Decree establishes, in the second paragraph of its Art. 2 that the obligation to register in the Registry includes those who are “producers of alcoholic beverages, as sellers of their production”. The obligation also reaches those who carry out the aforementioned activities temporarily, sporadically or on an ambulatory basis.

Subjects that produce beverages of the abovementioned type and use them exclusively for self-consumption are excluded from registration.

According to Art. 4, the enrollment in the Registry requires the indication of certain data: full name, identity card number or RUT number and address. On the other hand, it is also necessary to file certificates that are up to date before DGI and BPS, commercial or bromatological authorization of the premises or sales post by the respective Departmental Government (if there is more than one place or position, information of each one of them must be presented), as well as the accreditation of the validity and representation, in case of being a legal person.

The General Directorate of Health will be in charge of issuing the corresponding permit, which will be granted without a deadline and will remain in force as long as the conditions that motivated its issuance are unchanged, except for well-founded reasons that justify the revocation.

Such permission must be permanently exhibited in the premises, establishment or place where the respective activities take place.

The obligors must register in the Registry within 90 calendar days once it is operational.

Failure to comply with the inscription is considered a “serious offense”, and the sanctions provided for in the Law may be imposed on the non-compliant (from observation and warning, to fines of between 1,000 IU and 100,000 IU, and temporary or definitive suspension of permits, as well as temporary or permanent closure of establishments -prior judicial process-, cessation of publicity and realization of counter advertising, at the cost of the offender).

2. Some definitions of the terms expressed in the Law.

Art. 16 of the Decree, within the framework of the provisions of Art. 15 of the Law, is responsible for defining “public shows that promote the intake of alcoholic beverages” as those that are exclusively or mainly aimed at promoting consumption without other cultural or artistic content.

For its part, it is also determined what is considered by “reasonable availability of drinking water” (in public shows): a volume of 1 liter of water per person, considering the total number of people for whom that particular public show is enabled. If the show exceeds 5 hours, the availability of drinking water should be extended proportionally to the effective duration of the event.

All the abovementioned should be considered independently from the water available for sale.

Article 19 of the Law prohibits any form of advertising or promotion of alcoholic beverages aimed at people under 18 years of age, as well as that advertising or promotion which contains or represents said minors (including images that appear similar to their physiognomic characteristics). In this context, advertising may not transmit (either directly or indirectly) health virtues or misrepresentations regarding the consumption of this kind of drinks; Associate them with meanings that express an improvement in physical, intellectual or work performance, among other issues with similar purposes. Nor may advertising of alcoholic beverages be presented immediately before, during or immediately after the issuance of tv shows specifically aimed at minors.

Promotion is also forbidden through the distribution of information by mail, telephone or internet technologies, whose recipients are under eighteen, as well as the distribution of samples of alcoholic beverages, invitations, graphic material, promotional material such as t-shirts, caps, etc., or similar objects, alluding to this type of drinks or their brands. It is also prohibited the sponsorship or any other form of financing of sports, educational, cultural or leisure activities, aimed specifically at children under 18, if this involves the advertising of such sponsorship, or the dissemination of brands, symbols or images associated with alcoholic beverages.

On the other hand, all advertising messages must contain the following message: “The sale to people under 18 years of age is prohibited”. The following annotation must also be included in an easily perceptible way:

“Alcohol abuse is harmful to health.

The consumption of alcoholic beverages during pregnancy, even in small quantities, can seriously harm your health.

The consumption of alcoholic beverages impairs your ability to drive vehicles or operate machinery.”

As for the labeling of beverage containers, they must contain their alcoholic strength, as well as the preventive messages indicated above.

For its part, the following pictogram that warns about the risk of consumption on pregnancy must be included in the labeling: 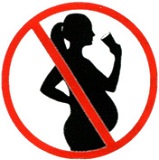 Finally, it is established that all publicity, sponsorship, support or sponsorship that involves the diffusion of brands, symbols or images associated with alcoholic beverages in public shows, must contain 15% (fifteen percent) of the notoriously exposed space for preventive messages in all the expressions used, which can be graphic, television, audio or any other means or type. The telephone service for problematic consumption, known as "* 1020", must also be disseminated.

Other measures to prevent and raise awareness about the problematic consumption of alcoholic beverages are also available through programs and plans coordinated between different organizations (Arts. 13 to 15 and 21 to 25).